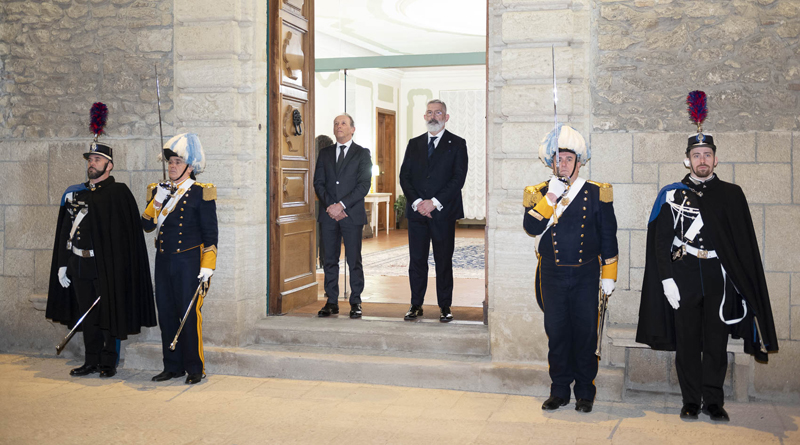 The Grand and General Council of San Marino has elected Their Excellencies, Mr Oscar Mina II and Mr Paolo Rondelli I, to serve as Captains Regent of San Marino for the period 01 April- 01 October 2022.

HE Mr Oscar Mina has served previously as a Captain Regent during the period 1st April – 1st October 2009. He was born on September 24, 1958, in Serravalle, resident there, Republic of San Marino.

By professional training, he is an Industrial Expert. His political career started in 1998 when he joined the Christian Democratic Party of San Marino

HE Mr Paolo Rondelli I

HE Mr Paolo Rondelli was born in San Marino in 1963 and has served his country over the years as a civil servant and diplomat, up to being appointed Ambassador to the USA (2007 – 2016), Ambassador and Permanent Representative to UNESCO (2016 – 2019), National Commissioner at the 56th and 57th Biennale of Visual Arts in Venice and at the 17th Architecture Biennale and Director of Cultural Institutes, a position currently held.

He is a Member of the Grand and General Council since December 2019, where he holds the role of President of the Permanent Council Commission II (Foreign Affairs) and that of Government Mayor. In addition, he is a member of the National Delegations to the OSCE Parliamentary Assembly and the Inter-Parliamentary Union.

He graduated in Chemical Engineering in 1990. He holds a Level II Master in Historical Communication and completed a Postgraduate Course in Environmental Sciences and Technologies, all qualifications obtained at the University of Bologna.

He has received the following honours:

He is an active member of the “Alan Turing” Arcigay Rimini Social Promotion Association, of which he was a member of the Board and Vice President from 2018 to 2021.

HE Mr Paolo Rondelli is the first-ever member of the LGBTQ+ community to be elected to such a high position in San Marino.