Consulate of the Republic of San Marino to the UK

It is a landlocked state in southern Europe located in the north-central Italian peninsula, on the border between the Italian regions of Emilia-Romagna ( province of Rimini) and Marche (province of Pesaro and Urbino).

It has a territorial extension of 61.19 km², populated by 33 422 inhabitants. Since 2008, the historic centre of the city of San Marino and Mount Titano have been listed by UNESCO as a World Heritage Site as “evidence of the continuity of a free republic since the thirteenth century”.

Located in Southern Europe, the Republic of San Marino is an enclave in central Italy overlooking the Adriatic Sea, with a territory of 61km2 and about 33,000 inhabitants. It is the oldest sovereign state and constitutional Republic in the world, founded on 3 September 301 A.D.

It is the intention of the Consul and the Consulate’s staff to offer all the available and most accurate information for all private individuals, public institutions, and economic operators interested in the Republic of San Marino, in order to promote friendly bilateral relations of mutual benefits between the Republic of San Marino and the United Kingdom, as well to promote and protect the best interests of the San Marino citizen, residents and visitors in the UK.

For information and appointments please do not hesitate to email us at  cons.londra@gov.sm

NEWS from the Consulate

San Marino Consulate in London is very pleased to announce its decision to give its full patronage to the Esharelife Christmas Concert for AVSI Kenya,… 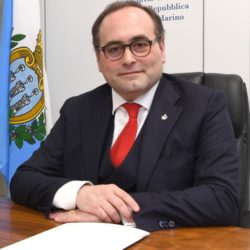 On October 19, 2020, the Court of the Company of Communicators – the Livery company’s governing body – welcomed the Honorary Consul of San Marino…

On October 14th 2020, the Honorary Consulate of the Republic of San Marino in the UK attended the Annual General Meeting (AGM) of the Manchester…

The Republic of San Marino, the oldest democracy and the only surviving city-state in the world, is delighted to announce the award of its most…