According to tradition, San Marino was founded by a Christian stonemason named Marinus the Dalmation, who fled the island of Arbe to escape the anti-Christian Roman Emperor Diocletian. Marinus hid on the peak of Mount Titano and founded a small community of people following their Christian beliefs.

Its rugged isolation helped the enclave to develop, and keep its independence. The country became a republic in the 1300s. An 1862 friendship and cooperation treaty with Italy, which has since been revised and expanded, reinforced San Marino’s independence.

The land area of San Marino consisted only of Mount Titano until 1463, when the republic entered into an alliance against Sigismondo Pandolfo Malatesta, Lord of Rimini, who was later defeated. As a result, Pope Pius II Piccolomini gave San Marino the towns of Fiorentino, Montegiardino and Serravalle. Later that year, the town of Faetano joined the republic on its own accord. Since then, the size of the country has remained the same.

San Marino has been occupied by foreign militaries twice in its history, both for only short periods of time. In 1503 Cesare Borgia, known as Valentino, occupied the republic until his death several months later. In 1739, Cardinal Alberoni used military force to occupy the country, but civil disobedience was used to protest this, and clandestine notes sent to the Pope to obtain justice were answered by the Pope’s recognition of San Marino’s rights and restoration of independence.

In 1797, although Napoleon invaded Italy, San Marino’s situation was unaffected. Indeed, following the Napoleonic Wars, San Marino’s independence was recognized in 1815 at the Congress of Vienna.

In 1849, San Marino agreed to provide refuge to the famed Italian nationalist Garibaldi in defiance of Austrian forces In 1862, relations with Italy were consolidated by the signing of a customs union as well as a treaty of friendship and cooperation.

Through the war years from 1940 to 1945, San Marino remained neutral although it became home to approximately 100,000 Italian refugees, including around 12,000 Jews.

Since 2008, the historic centre of the city of San Marino and Mount Titano have been listed by UNESCO as a World Heritage Site as “evidence of the continuity of a free republic since the thirteenth century”.

In 1988, San Marino joined the Council of Europe and four years later in 1992, the country became a member state of the United Nations.

For information and appointments please do not hesitate to email us at  cons.londra@gov.sm

NEWS from the Consulate 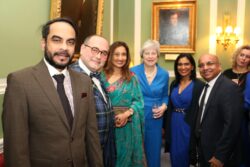 On January 11th, Consul Dr Maurizio Bragagni OBE attended a diplomatic event at the Carlton Club in support of the Maidenhead Conservative Association The Guest…

The Honorary Consulate of San Marino is pleased to advertise a new internship position from March 2023. The position aims to offer students the possibility…

Consul Dr Maurizio Bragagni OBE, in his capacity of Chairman of the Esharelife Foundation, participated in the celebratory event organised on 1 December 2022 in… 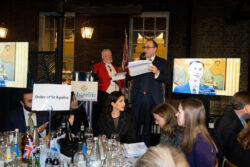 On 23 November 2022, around 150 distinguished guests, from diverse backgrounds, shared their time and support to advance the Esharelife cause: free access to quality…

On 9th November 2022 Consul, Dr Maurizio Bragagni OBE, was part of the delegation receiving on an official visit to San Marino a high delegation…