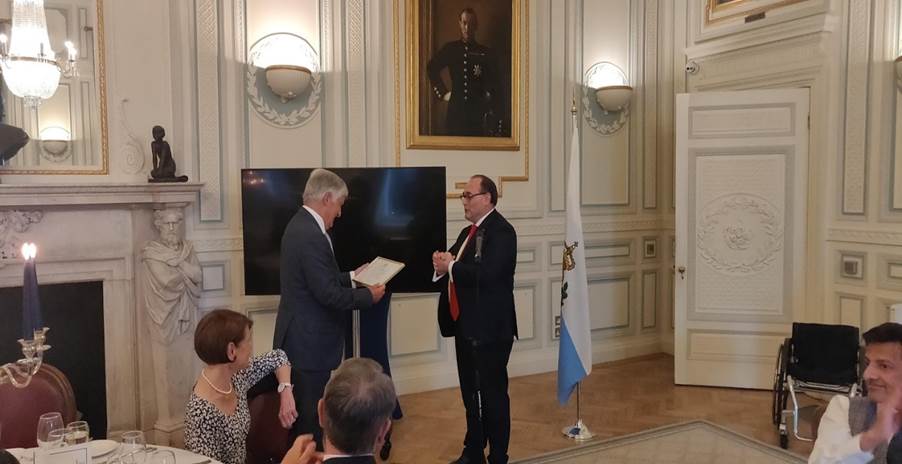 When the Covid-19 pandemic started, the smallest countries, like San Marino, were hit hard from the beginning. Immediately, the Honorary Consulate of San Marino in the UK started to mobilize help, by contacting several UK authorities, and other people with influence that could help San Marino to pass through these difficult times.

Mr Bernstein was among the first persons to promise help, and he made it possible to put in direct communication the Italian Red Cross with San Marino one. And things got better for San Marino since then!

Mr Bernstein is ending his tenure with British Red Cross Committee, but he brought with him a wealth of experience from across multiple sectors, commercial, sporting, and voluntary sectors, and made a great contribution to further advancing the excellent work of the British Red Cross in the UK and internationally.

During the evening, Honorary Consul Bragagni, mentioned: “As tonight we celebrate together the slow return to life as it was before the pandemic, I would like to present to David a special award, The Friendship Award, for his support to the Republic of San Marino and his legacy and contribution to the British Red Cross during these hard times”.

Professor Nadey Hakim, co-host of the dinner, Professor of transplantation surgery at Imperial College London and a man of many talents, including sculpture, gifted to Mr David Bernstein his own sculpture portrait in bronze.

This successful event has benefited from the presence and active participation of several guests, including Lord Rami Ranger.