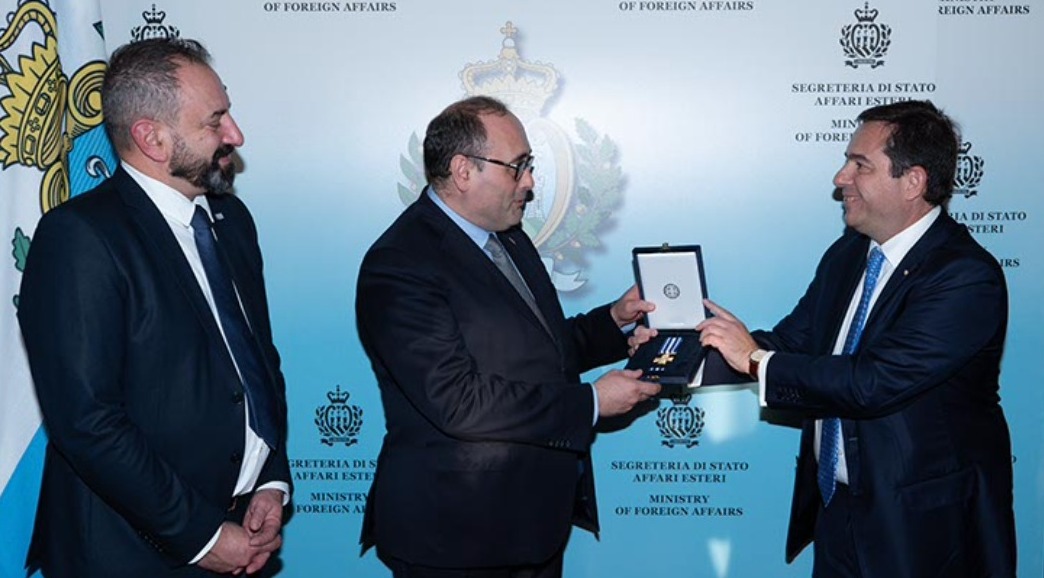 On 9th November 2022 Consul, Dr Maurizio Bragagni OBE, was part of the delegation receiving on an official visit to San Marino a high delegation from the Hellenic Republic, headed by the Minister for Immigration and Asylum, H.E. Notis Mitarachi, accompanied by Ambassador of the Hellenic Republic to San Marino, HE Mrs Eleni Sourani, and the Minister’s Head of Cabinet, Mr Konstantinos Kostakos.

The delegation started the official program of the visit at Palazzo Begni where they met the Secretary of State for Foreign Affairs, HE Dr Luca Beccari. During this meeting in focus were issues related to strengthening bilateral cooperation between the oldest Republic in the world, San Marino and the place birth of democracy, the Hellenic Republic, to guarantee security and address common challenges such as those related to energy security and raw materials.

Among the other topics dealt with were international current affairs, with particular attention to the ongoing conflict in Ukraine and in reference to the reception of hundreds of refugees by the Republic of San Marino. Another important topic was the support of the Hellenic Republic to San Marino in the ongoing negotiations to reach an Agreement of Association with the European Union.

Both delegations expressed the desire to further strengthen cooperation, particularly in the economic field and maintain a high level of relations emerged also in the light of the affinities of the two very ancient states anchored to the principles of democracy. Both sides confirmed their willingness to strengthen multilateral cooperation, particularly within the United Nations and the Council of Europe.

At the end of the meeting, at Palazzo Begni was organised the ceremony for the exchange of state awards –  the Grand Cross of the Equestrian Order of St. Agatha to  H.E. Notis Mitarachi  and Ministerial Commendation Medal A’ Class to Secretary of State, HE Dr Luca Beccari.

In recognition of Consul Bragagni’ s merit in strengthening bilateral relations between San Marino and the Hellenic Republic, as well for his valuable contribution as Chairman of the Esharelife Foundation in supporting charitable initiatives and actions in the field of migration management and mitigation of the relevant consequences, especially during the event of crisis, H.E. Notis Mitarachi  awarded to Consul Bragagni the Ministerial Commendation Medal B’ Class.

This award will further motivate  the Chairman Maurizio Bragagni and the whole Esharelife Foundation, a charity that helps thousands of young people, mostly girls and women, migrants, displaced people and persons from the most vulnerable layers of society in Kenya, to continue their tireless efforts to create new and strengthen the existing capacities to make it possible for as many as possible vulnerable people to escape from poverty and have a decent life.

Afterwards, H.E. Notis Mitarachi was received in the audience by the Most Excellent Captains Regent of the Republic of San Marino, HE Ms Maria Luisa Berti II and HE Mr Manuel Ciavatta I.