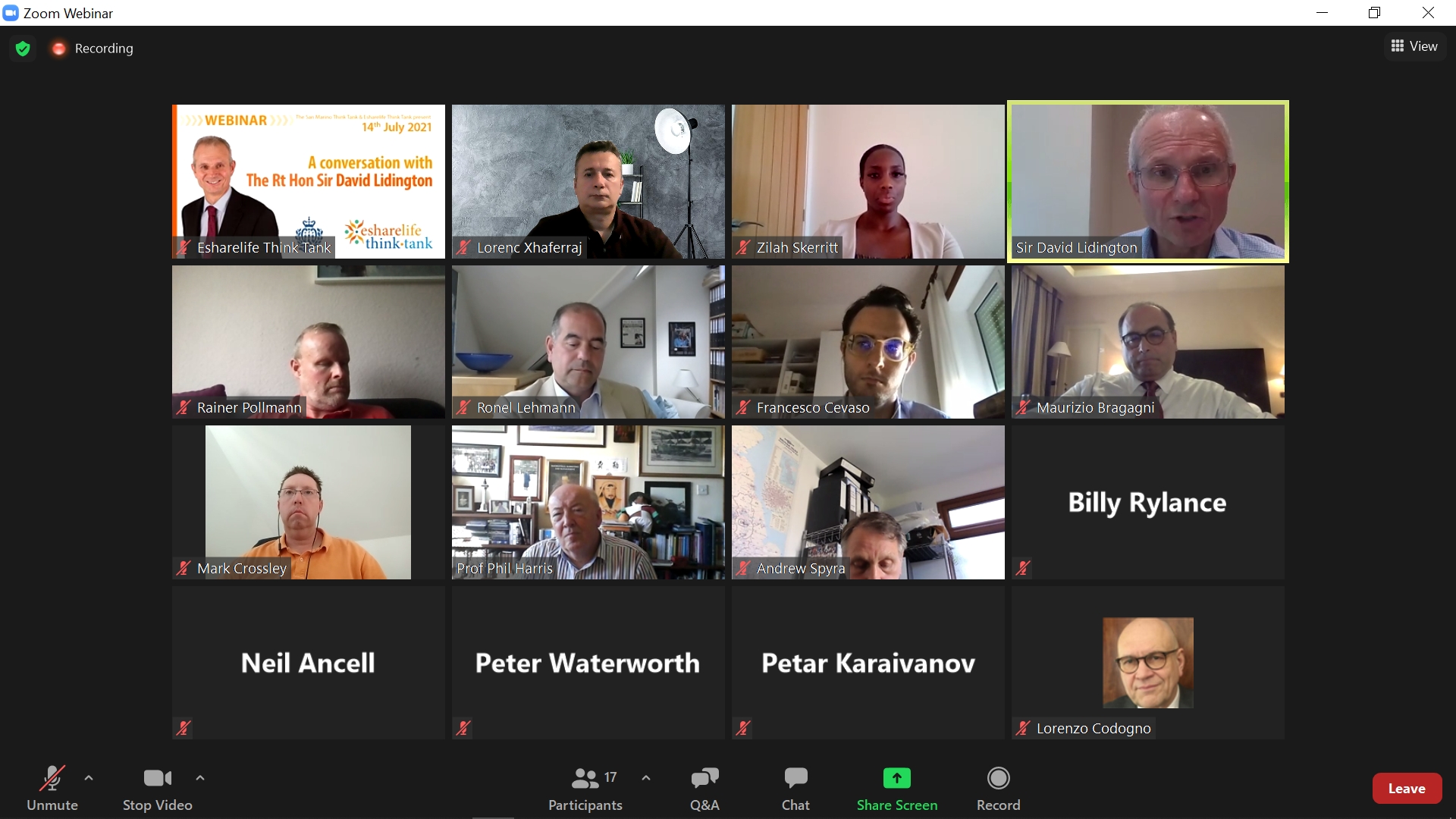 On 14th July 2021, San Marino Think Tank & Esharelife Think Tank organised a webinar with Rt Hon Sir David Lidington KCB CBE, dedicated to the challenges of promoting democracy and its values in our contemporary world viewed through the lenses of security.

Rt Hon Sir David Lidington is a seasoned politician, former member of the UK parliament and Chair of the Royal United Services Institute (RUSI), which is the UK’s leading and oldest security and defence policy think tank.

Sir Lidington shared his broad experience within the field of security and clearly stated that, in today’s world, there is no neat dividing line between homeland security and international security. This, he argued, is one of the consequences of internet and social media, which are now used as a means to “groom and radicalise potential extremists and terrorists and to organise the operations of serious and organised crime”, as well as a source of propaganda, a vector for very wide fraud for individuals, and the means through which cyber attacks can be directed.

He then carried on talking about the international military threats, and how subversive tactics and information propaganda warfare luckily have been unsuccessful in long-established Western democracies. However, the major hazard for democracies, as identified by the integrated review of the UK government, is the authoritarian regimes’ determination to achieve dominance in all the key 21st-century technologies. In fact, the risk is that democracies will find it impossible to rely on any supplier being able to provide what they need in technological terms, without needing the authoritarian regimes’ know-how kit. For this reason, Sir Lidington underlined the importance for democracies to “get their act together, and quickly”, by renewing their own capabilities to innovate, experiment, and develop a technological base of their own.

Finally, he highlighted the need to improve democracies’ resilience, in order to appropriately respond to cyberattacks that seek to bring down critical infrastructures. These must include supply chains, networks, IT systems, and not only the physical structures.

Dr Bragagni, the moderator of the webinar, raised some provoking questions on the challenges posed by authoritarian countries to western democracies. In fact, there is evidence of many attempts to interfere with elections of longstanding democracies, which are cleverly covered as legitimate efforts. Sir Lidington stressed the importance to uphold the probity and reputation of the democratic system, as being a form of critical national infrastructure, which is now what the UK government is aiming to achieve. He also pointed out that a model of a pluralist, liberal society, which democracies seek to embody, is still a majorly attractive one for the majority of the people in the world, especially for refugees seeking a new, fresh start.

A stimulating Q&A then took place, where the participants were able to ask Sir Lidington their questions. Sir Lidington briefly explained his view on politics, according to which a great part of it involves compromise. In fact, a politician’s main aim is to achieve their objective, and therefore most of their efforts involve tactics and practicality. For this reason, he stressed the importance of linking policy making to implementation and the allocation of money, and the need to use soft power, also defined as “smart power”, between and within democracies to promote national interests and to protect this form of government.

Sir Lidington concluded by answering the question on what democracy means to him, which he claimed above all other things the rule of law. The history of the 20th and early 21st century demonstrates that creating democratic institutions, elected parliaments and elected presidents is not enough to create democracy. Unless there are independent courts, run by vigorously independent and fearless judges, and a government and a political culture which accept that everyone is subject to the rule of law, it is impossible to sustain what we think of as a democratic society. Therefore, it is the rule of law, democratic institutions, and a recognition of human rights grounded in the sense of the dignity and autonomy of each individual which provide both an institutional and ideological framework within which democracy can be generated.