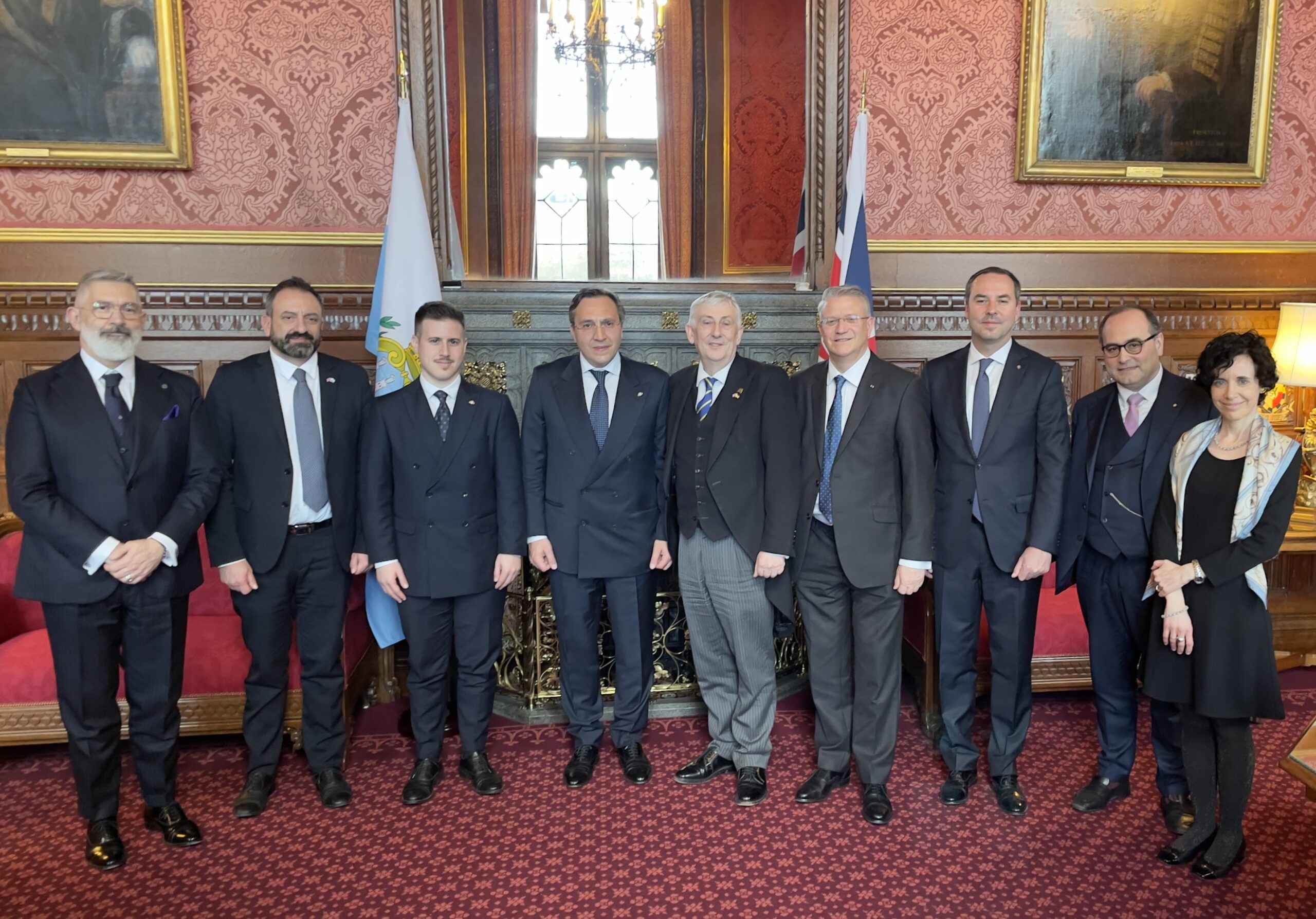 On 8-11 March 2022, acting on the invitation issued by the House of Commons’ Speaker, Sir Lindsay Hoyle MP, a delegation from the Republic of San Marino, headed by the Captain Regents, their Excellencies Mr Francesco Mussoni and Mr Giacomo Simoncini, conducted a Parliamentary visit to London.

Part of the delegation was also HE Dr Luca Beccari, Secretary of State for Foreign Affairs, HE Mr Teodoro Lonfernini, Secretary of State for Labour, HE Dr Silvia Marchetti, Ambassador Non-Resident to the UK,  Dr Maurizio Bragagni, Honorary Consul to the UK and CEO of Tratos UK Ltd, as well as Mr Paolo Rondelli, Chairman of the Parliamentary Foreign Affairs Committee.

This visit marked the first-ever high-level visit of a delegation from San Marino to the UK Parliament and another significant fact was that it was conducted on the Queen’s Platinum Jubilee year.

During the visit, the Captains Regent had a friendly meeting with the UK PM Johnson where both parties expressed the understanding of the common wish of the two countries to forge the noble alliance between them and help each other in terms of security and economic prosperity. Prime Minister Johnson expressed appreciation for the position taken by San Marino on the ongoing conflict and positively assessed the political alignment between the two countries. During the meeting, it was reinforced the necessity and the general consensus for the conclusion of the two pending economic agreements on the protection of investments and against double taxation.

The Captain Regents had separate bilateral meetings with both Speakers of the Houses of the UK Parliament. During the meeting with House of Lords’ Speaker, The Rt Hon Lord McFall of Alcuith PC, there were reaffirmed friendly relations between the two countries and the determination to strengthen them in the future using parliamentary diplomacy. The same determination was expressed by the Speaker of the House of Commons, Sir Lindsay Hoyle, which was conducted in a very friendly atmosphere.

The Captain Regents had bilateral meetings with Mr Tom Tugendhat MP, Chair of the Foreign Affairs Committee and with Rt Hon Jeremy Hunt MP, Chair of the Health & Social Care Select Committee and Knight Grand Officer of the Order of St Agatha. During these two meetings, there were discussed the state of current global affairs and the positions of respective governments, as well the social and healthcare issues. The UK side expressed its determined will to strengthen the cooperation with San Marino in the security and economic sector, especially now in a post-Brexit context.

The Parliamentary visit was facilitated by Cav Andrew Rosindell MP, Chairman of the APPG on San Marino at the UK Parliament, who together with some of APPG members have accompanied the delegation during this very busy parliamentary visit. Cav Rosindell has stressed in every meeting the special relationship between the UK and San Marino, the commonalities between the two countries and expressed the full support of the APPG to continue the dialogue between the governments and institutions of both countries, aiming at finalising the pending economic agreements and strengthening this special relationship in the future.

In the multilateral context, the Captains Regent met with the Secretary-General of the International Maritime Organisation, HE Mr Kitack Lim, where they discussed the opportunities to strengthen the cooperation in the Maritime sector, especially now that San Marino has established its own Ship Registry. During the meeting the captain regents awarded to Mr Kitack Lim the Order of St Agatha.

A special ceremony was organised where Secretary of State for Foreign Affairs, HE Dr Luca Beccari, in the presence of Their Excellencies Captain Regents awarded the order of Saint ’Agatha to 5 British citizens for their distinctive merits to support San Marino during the Covid-19 pandemic.

Consul Dr Maurizio Bragagni OBE hosted a welcome reception in honour of the delegation headed by Their Excellencies Captains Regents. In attendance were several members of the House of Lords, House of Common, UK government, Diplomatic corps, SM citizens resident in the UK, business representatives. After the reception, Their Excellencies, The Captains Regent, held a private audience for the San Marino citizens resident in the UK, where they discussed various matters in relation to the UK, San Marino and the current global affairs.