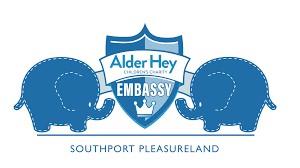 On 1 June 2021, Frankie Bowen, a eight-year-old boy who woke one morning unable to walk, raised the Alder Hey Children’s Charity flag as the world’s first charity embassy is set to open at Southport Pleasureland, Merseyside, UK.

The Honorary Consul of San Marino was among the first members of the diplomatic corps in the UK to support the  establishment of the first ever children’s charity embassy and would like to extend his warm wishes and to wish them every success toward fulfilling its noble mission.

The Alder Hey Children’s Charity Embassy at Southport Pleasureland will play an important role in making sure park visitors will consider supporting a charity that is so important to us all and has proven to do such incredible work to improve healthcare.

Dr Bragagni expressed his confidence that Alder Hey Children’s Charity child ambassadors will offer a great contribution toward further advancing the work to support the transformation of Alder Hey Children’s Hospital to a truly world-class, patient-friendly hospital for the 330,000 patients and families they care for each year.

In line with the diplomatic tradition, the new Embassy represents a piece of the charity’s territory within the park, the region’s leading family-focused attraction.