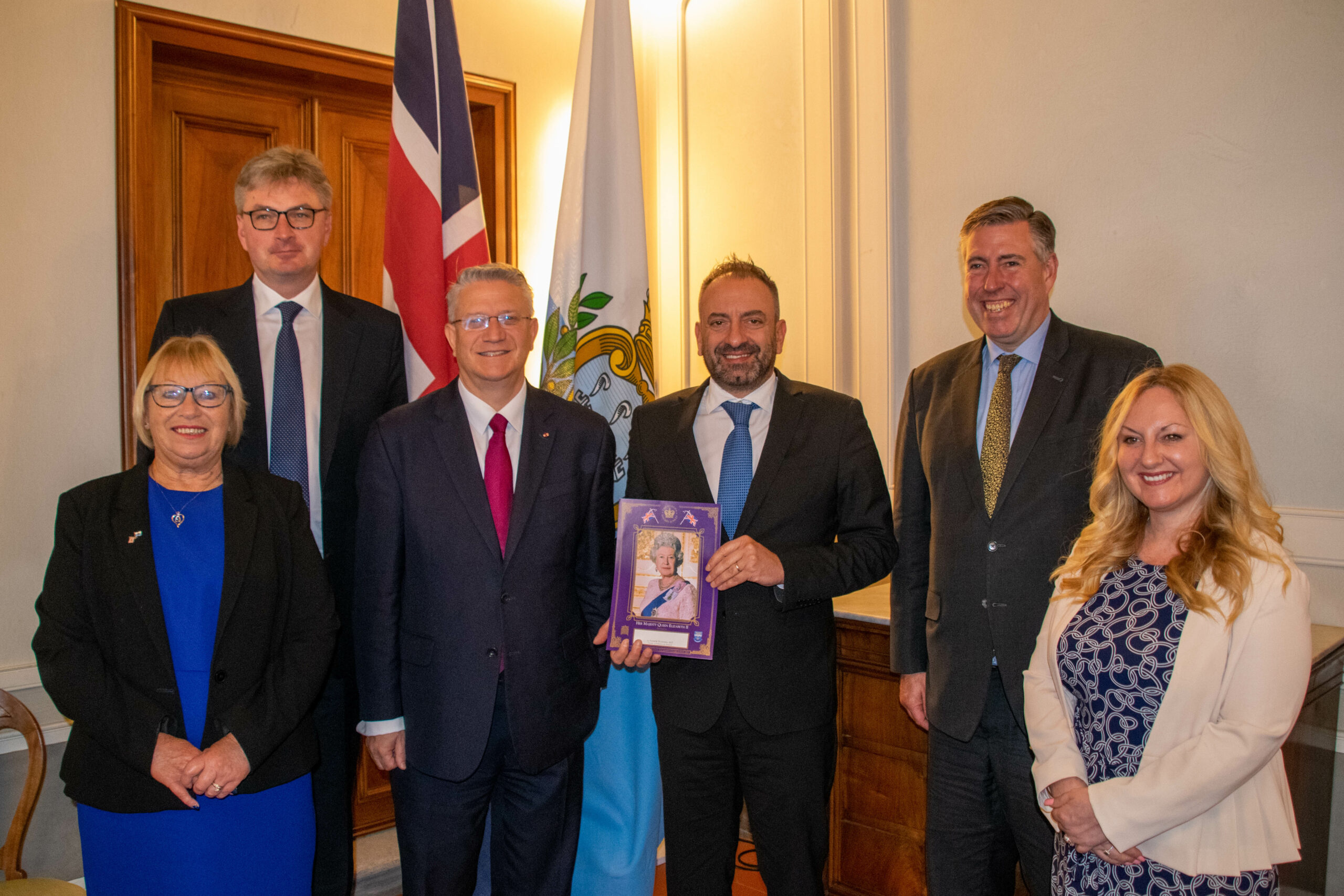 A delegation of APPG on San Marino of the UK Parliament conducted a working visit to San Marino on 11-15 October 2021. This marked the first visit of such nature since the establishment of the APPG.

The delegation was led by Cavaliere Andrew Rosindell MP, Chairman of the APPG on San Marino and benefited from the participation of 3 APPG Vice-Chairs – Mrs Sheryll Murray MP, Mr Daniel Robert Kawczynski MP, Dr Lisa Cameron MP, and of Sir Graham Stuart Brady MP, member of the APPG and Chairman of the 1922 Committee of the Conservative Party.

The delegation had a very intensive agenda and met with various San Marino officials across different departments. During the meeting with Dr Luca Beccari, Secretary of State for Foreign Affairs, Mr Rosindell stressed out that this visit marks the beginning of a close friendship between the two countries, and there is no better way to do this than to bring parliamentarians together and thanked the Ambassador and Consul Bragagni, who worked hard to make sure that the name of San Marino is strongly inserted in the minds of the UK parliamentarians. From his part, SoS Beccari expressed the determination to intensify the work to strengthen the relations not only in bilateral terms but as well in the multilateral fora. San Marino is going through great challenges due to the Covid1-19 pandemic, but behind hospitalizations and great challenges, there are even greater opportunities.

A very constructive meeting was held with the members of the San Marino Government, where APPG members discussed concrete measures on how to boost the socio-economic cooperation between the two countries. The APPG members indicated that now that the UK exited the EU, it is the momentum to work bilaterally and forge economic deals. They committed themselves to working toward concluding the bilateral agreements on avoiding double taxation and on promotion and protection of investments. There were highlighted the opportunities that the UK and San Marino have on international trade, improve financial services, currencies and new fintech. Discussions were concentrated on what mechanisms will be needed for the bilateral agreements to try to make them practical.

The same commitment was expressed during the meeting they had with Mr Paolo Rondelli, Chairman of APPG on the UK of the San Marino Parliament, and of its members. The parliamentarians of both countries shared freely their experiences on serving on the respective parliaments, stressed the need to establish the legal framework for bilateral cooperation, and assisted each other on international forums to reach a common understanding & cooperate more on global issues such as climate change, health, tourism, research, and innovation. From the UK side it was highlighted the huge amount in common – attachment to traditions, the value of freedom, democracy, common law, and as both countries are outside the EU, they can freely talk about the bilateral relations they want to build in the future.

Another impactful meeting was held with the representatives of the San Marino Economic Development Agency& Chamber of Commerce. APPG members through a detailed presentation on doing business in San Marino received a general overview of what San Marino can offer to foreign investors. This meeting has greatly contributed to exposing the best of San Marino investment opportunities and positively influenced the UK parliamentarians to push harder for the conclusion of the pending economic agreements between the two countries.

The APPG concluded its visit by meeting the representatives of San Marino University, with whom they discussed the opportunities on deepening the cooperation between the academic and research institutions of both countries by means of increasing the student’s exchange, MoUs of cooperation and on how to make more accessible to the students the MoU on Youth Mobility Scheme.