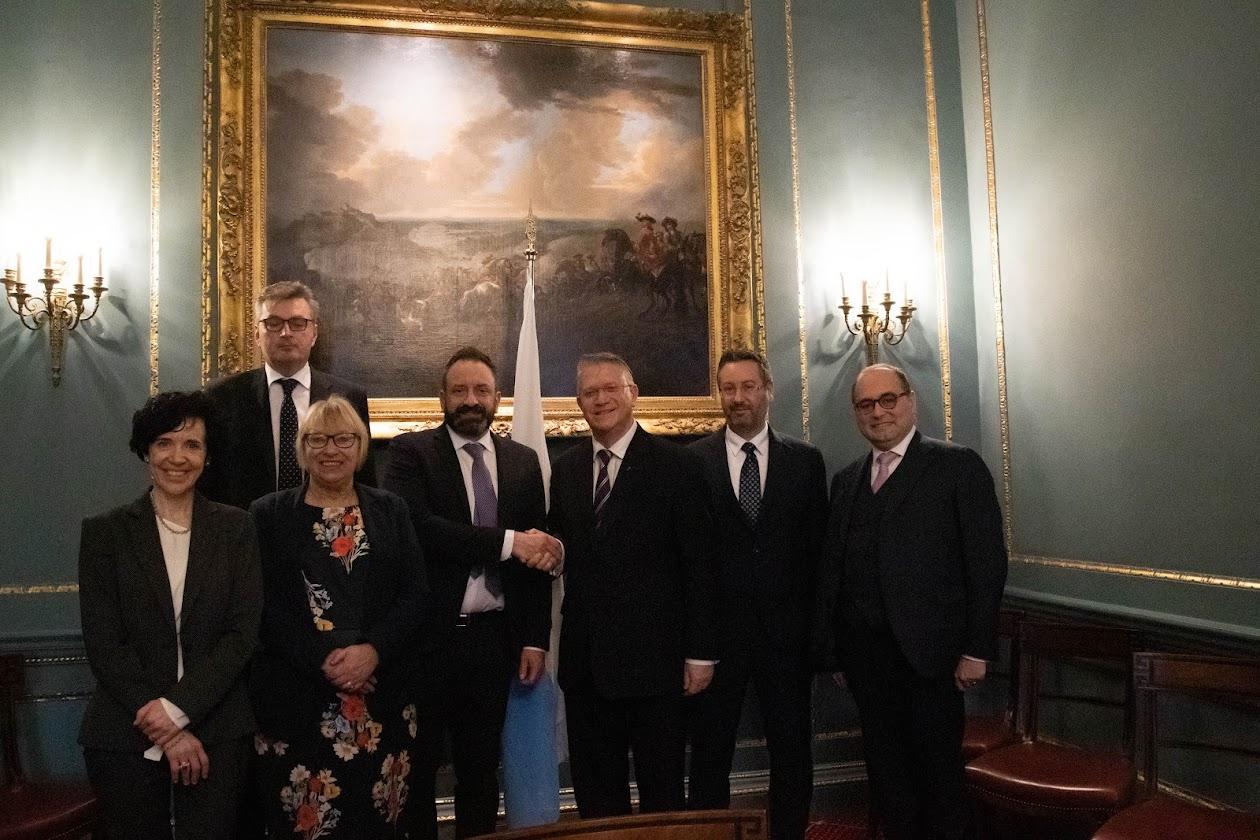 On 7-9 February 2022 a delegation from San Marino, headed by the Secretary of State for Foreign Affairs, International Economic Cooperation and Telecommunications, HE Dr Lucca Beccari, paid a working visit to the UK. Members of the delegation were also the Secretary of State for Finance and Budget, HE Mr Marco Gatti, the Ambassador to the UK (non Resident) HE Dr Silvia Marchetti and the Honorary Consul of San Marino to the UK, Dr Maurizio Bragagni OBE.

The visit took place at a time when the UK has embarked on a journey to make the UK a true global leader, a champion of free trade and a strong advocate of multilateralism and a rules-based international order. The cooperation between the two countries in international fora has been vivid and San Marino is looking forward to seeing this special relationship evolve and grow in the future.

The aim of this visit was to discuss matters that will forge the noble alliance between San Marino and the UK, an alliance between two old and traditional friends, that will provide a solid foundation for the Republic to carry on and meet the current and future challenges of the time.

The delegation met with several high ranking officials from the UK Government, UK Parliament, City of London and representatives of businesses with an interest to invest in San Marino.

An important meeting was held with the Secretary of State for the International Trade, Rt Hon Anne-Marie Trevelyan, and her team, during which there were discussed matters related to concluding & signing the agreements on promotion and protection of investments. The meeting was useful in reaffirming the commitment of the UK government to conclude this agreement as soon as possible.

Talks were held with several officials about the necessity to conclude another agreement on avoiding double taxation. Having in place these two above mentioned agreements will pave the road for economic investments and increase the trade exchanges between the two countries.

Another successful meeting was held at the Foreign, Development and Commonwealth Office, with the Minister of State, Lord Ahmad of Wimbledon, which reaffirmed the friendly bilateral relations between the two countries and it provided the assurances of the mutual understanding to continue to work even more energetically to conclude the necessary legal framework of cooperation and support each other in the multilateral diplomatic initiatives and international organizations.

The working breakfast with Cav Andrew Rosindell MP, Chairman of the APPG on San Marino and some of its members reaffirmed that after the successful APPG visit in San Marino last October, the whole group of MPs is determined to lobby the UK Government and push it to conclude the legal framework of cooperation as soon as possible. The APPG on San Marino of the UK parliament is and will remain an important mechanism of using parliamentary diplomacy to boost bilateral cooperation.

On 8 February 2022, the Consulate organised a reception to mark St Agatha Day and on the occasion of the working visit. The event benefited from the participation of the distinguished guests from the UK Parliament, the APPG on San Marino, the UK government, members of the diplomatic corps, business representatives and of the San Marino community resident in the UK.

During the event, there were made short speeches by Consul Dr Maurizio Bragagni OBE, HE Dr Lucca Beccari and Cav Andrew Rosindell MP, Chairman of the APPG on San Marino.

They highlighted the significance of celebrating St Agatha, the Saint Patron of San Marino, as well as the friendly relations between the UK and San Marino, which are set to grow even stronger after the successful visits of APPG to San Marino last October, the current working visit and the upcoming visit to the UK in March of their Excellencies Captains Regents.